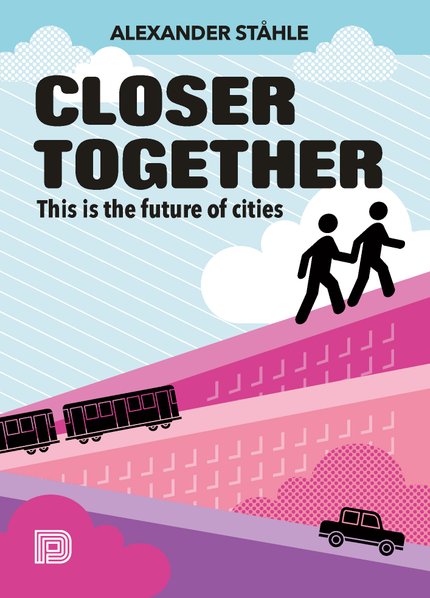 What will future cities look like? In Closer Together city researcher Alexander Ståhle describes the economic and political driving forces of urban change and why we will drive less and live happier in the future.

"Cities are places where people and cultures come closer together. This creates the opportunities and quality of life which defines sustainable development and successful cities. Closer Together describes how and why proximity is a fundamental driving force in future cities. An important book."

"People are social animals and cities are social places, yet so many cities are designed in ways that make it hard to be human amid wide avenues, diffuse neighborhoods and sprawling boundaries. Alexander Ståhle reveals the life hidden between the lanes and shows how we can kindle the best in our cities - and save the world - by bringing people closer together."

"In Closer Together, Alexander Ståhle presents a powerfully substantiated case for a compact city, where proximity, between people and people and the places where they realize their daily activities. It is an insightful glimpse into the more humane city that can be, often referring to debates in Sweden, one of the wealthiest and most democratic countries in the world, which are relevant to cities all over the world. Closer together gives an inspiring overview of the deformations cars brought to urban life and the way to go from there to create different, more humane, happier cities in the near future. I enjoyed it thoroughly."

"What should the city of the future look like? Alexander Ståhle’s passion for this question has led him from Stockholm to Tokyo--and into the minds of thousands of his survey participants. It turns out that the city almost all of us say we want also happens to be the city that will save us from the converging crises of this urban century. Closer Together offers a rich, globe-trotting, evidence-based argument for a city that will bring out the best in all of us."

"Whether for health, economy, or happiness, Ståhle's Closer Together presents the most compelling prescription for proximity in cities yet!"

- Mike Lydon, Principal at The Streets Plans Collaborative and Author of “Tactical Urbanism”

"With Closer Together Ståhle presents a wonderfully unusual book addressing the state of our cities. It is a journey along three dimensions: a personal account of exposing oneself to debates and actions in urban development, an introduction to historic and contemporary urban thought, and a campaign to consider the virtue of proximity not only as critical asset for professionals but as a fundamental quality of family life."

"Given that Alexander Ståhle is one of the most optimistic urbanists I've run across in my travels, it's not surprising that he's written a fundamentally optimistic book about better cities. Living closer together is indeed the key to our future, & this book helps explain how to do it well."

“Closer Together is not just about urban density but rather human needs, community, and a future we all wish to obtain, whether our home is rural or urban. With great anecdotes, pop culture references, and personal reflection, Swedish urbanist Alexander Ståhle puts together a book of which all urbanists and transportation professionals should take note.”

“Close Together is a wonderful, hopeful, truly energizing, engaging and accessible tour-de-force on the meaning of cities, how we lost that meaning through motorisation and sprawl, and how we are going to regain it and create wonderful urban places for everyone to live today and into the future. The book’s easy, personal writing style and approach brings the world of cities and urban transport to life in a way that everyone can understand, get excited about and be inspired by. I’ve not seen any book yet in this field that is able to cover so much ground so quickly, accessibly and with so much genuine engagement with its readers. There are no dead end streets in this book. One always wants to read on to see what’s around the next corner. It moves rapidly and seamlessly between the major planning and transport debates, schools of thought and issues that have shaped cities, historically, are shaping them right now and how things might, indeed should, unfold in the future, if we really care about urban places. It does this by constantly shifting gears and direction through a fascinating mixture of interesting stories, personal experiences, academic works, current and past research projects, community activism cases, political leadership successes, landmark local initiatives and much more (even the lyrics of Bruce Springsteen songs!). There is so much happening in the world of cities today at every level that it is almost impossible to keep up. One of the strengths of the book is its genuine openness, honesty and breadth of thinking in bringing together an extraordinary range and type of material on what is happening in cities in so many diverse quarters. And it does this in a simple, succinct and interesting way, bringing to life so much important knowledge that we would never get to know about or appreciate unless we read this book. And above all the author infuses passion into the book’s subject material. So while it is rich in academic source material and draws factual material from those quarters, it never strays too far from what is a deeply personal and inspiring message, which the author feels and conveys in a very persuasive and impassioned way.  Highly recommended for anyone interested in the future of planning and transport in cities and who wants to be alternately illuminated, entertained, intrigued and surprised on the journey.”

- Jeffrey Kenworthy, Professor in Sustainable Cities at Curtis University and Author of “Sustainability and Cities” och “The End of Automobile Dependence”

"Alexander Ståhle has written the most important book I have read in a long time about how we can seriously make our growing cities sustainable and good to live in. I have never seen so many and so persuasive evidence gathered in a compact format for we must turn upside down 'transportation power structure'. Pedestrians, cyclists and public transport must come first and the cars come last. and above all, he shows how it can be done - and that transformation has already begun! "

"This book is an important contribution to the discussion on how future cities should be shaped."

Alexander Ståhle aka Stockholm Cyclo, is one of the most popular and well-known speakers on urban futures and design in Scandinavia. He holds a PhD in Urban Design and is CEO of the studio Spacescape in Stockholm, and has been working with world-famous architects such as Bjarke Ingels and Foster and Partners on the most complex urban development projects in Scandinavia. Alexander lives in Stockholm with two children and no car.

What would Stockholm look like 2050 in the three scenarios Eco City, Techno City, Free City? We made postcards from the future for three places: exurbia, suburbia and inner city in Stockholm.